HHI Bridge blog https://hhibridge.blogspot.com/ is organized into two columns. The left column contains posts of bridge technical analyses (numbered), bridge news and bridge events (unnumbered). Scroll the left column starting with the most current post to the oldest post. The right column is an guide to maneuver with links around the blog. Scroll the right column for pages, topics and links.

This post features a great bidding and play analysis of a 6 ♠ slam. The bidding (part 1) features a convention called Last Train invented by Jeff Meckstroth and named after the song The Last Train to Clarksville. The Last Train is the bid just below game in an agreed upon major suit and is the last bid available before setting game at 4M. A Last Train bid is typically made in a bidding sequence where one partners has bid to show an interest in slam and the other partner has more than enough values to signoff in game.

This bidding analysis (part 1) is by Gary Donner playing South on this deal as gdonnersc1 on BBO. The play analysis (part 2) is posted as a separate analysis. (see Pages: Authors) 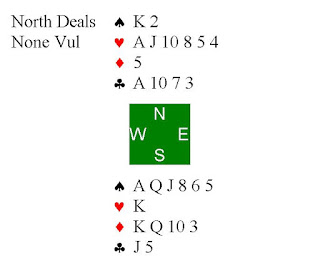 Auction: North deals and with 12 hcp and 6 losers opens the bidding 1 ♥. East-West are silent throughout. South responds 1 ♠ (natural) and North rebids 2 ♣ (natural). South with 16 hcp and 5 losers bids 2 ♦ as artificial and game forcing (GF) as Fourth Suit Forcing (4SF). The fact that South actually has diamonds has not been shown. North rebids 2 ♥ (6 hearts and denying 3 spades) and South rebids 2 ♠ (6 spades). In a game forcing auction North's bid of 3 ♠ does not promise any extras. South is still an unlimited hand and North would not want to use space to go to 4 ♠.

here is the complete deal and auction ... 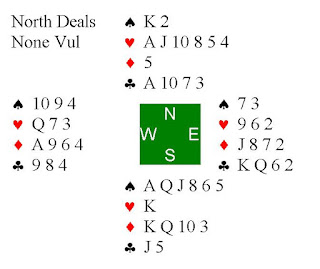 South's bid of 4 ♦ (below game level) is a soft control shows 1st or 2nd round in diamonds either the ♦ A or the ♦ K or shortness. It also denies 1st or 2nd round of clubs. Since North's hand is limited to 11-15 hcp, the 4 ♦ bid also shows mild slam interest. With strong slam interest South would bid 3 NT a convention called Serious 3 NT. It is not to play since spades have been agreed as trump. With no slam interest, South would simply bid 4 ♠.

Last Train: In this auction, 4 ♥ is the Last Train convention. Remember, Last Train is the bid just below game in the agreed upon major suit (spades) and is the last bid available before setting game at 4 ♠. As South has denies a club control, thus 4 ♥ must also show a club control. Otherwise, North would know they would be losing the first two club tricks and would simply end the auction. A Last Train bid is typically made in a bidding sequence in which one of the partners has already indicated slam interest.

In the absence of any partnership agreement, most players would bid 4 ♥ (below game level) as a soft control bid showing the ♥ A or ♥ K. The advantage of Last Train is that South has not denied a heart control. If North had a club control and not a heart control and would therefore simply bid 4 ♠, a slam could easily be missed.

The play (part 2) will be posted as a separate analysis.

The HHI Bridge blog is dedicated to a better understanding of the game of bridge. There is not just one way to bid or play a hand of bridge, there will be differences of opinion and that is OK ... feel free to make a comment on a post.
Posted by fergusfe at Saturday, April 11, 2020 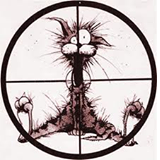 Each post focuses on a single topic: one deal, one subject, one explanation (bidding, play of the hand, etc.).